The ventral pancreatic bud develops into the uncinate process and main pancreatic duct structures of the pancreas. At E10.0 the ventral endoderm begins evagination of the surrounding mesenchyme to form a recognizable ventral pancreatic bud, opposing the dorsal bud formed a day earlier. Both ventral and dorsal buds subsequently proliferate, stimulated by mesenchymal signals, to form multiple branches and when the gut rotation translocated the ventral bud to the dorsal side, the two buds fuse together around E12 to form a functional organ. The ventral duct fuses with the distal part of the dorsal duct to become the main pancreatic duct (duct of Wirsung), while the proximal part of the dorsal duct becomes a small accessory duct (duct of Santorini) usually with its own opening into the duodenum.

ventral bud- initially 2 buds form from the ventral endoderm but in mammals the left one regresses, the remaining one forms the ventral bud alone; while in chick it remains and contributes to the pancreas. 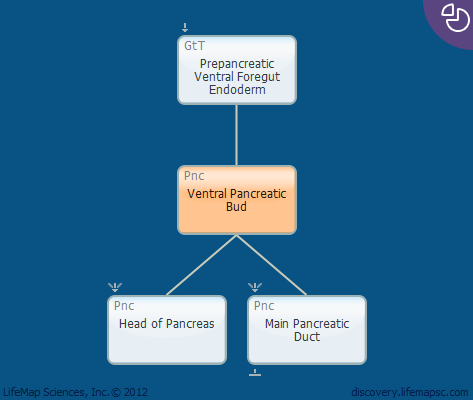 Embryonic Development of the Pancreas