Zgt.Bls
The blastocyst is an early embryonic structure arising from the preceding morula stage upon formation of a fluid-filled blastocyst cavity known as the blastocoele or the blastocyst-cavity. The blastocoele is formed by the compaction process within the morula. At the 32-cell stage,during which a fluid-filled cavity begins to form, the two layers of cells formed in the morula become more defined as the outer cells, which become committed to the trophoblast (trophectoderm) lineage and surround the cavity, and the inner layer, which form the inner cell mass (ICM, embryoblast), a compact mass on one side of the cavity (defined as the embryonic pole, vs. the opposing side called the mural or abembryonic pole). The blastocyst is therefore comprised of an inner cell mass, which subsequently forms the embryo, and a surrounding outer layer of cells, the trophoblast, which later forms the outer chorionic sac and the fetal component of the placenta. The human blastocyst comprises 70-100 cells, but cell numbers and stage names remain variable in the scientific community. Between days 3-4 of development, the human embryo reaches the uterus. By day 5, the human early blastocyst (sometimes defined as composed of 33-128 cells) is already within the uterus and hatches from the surrounding zone pellucida (by an enzymatic process which bores a hole in the zone pellucida) and begins to directly interact with the maternal endometrium. While mouse blastocysts implant at approximately E4–4.5, human embryos undergo at least one additional cell division, resulting in the late blastocyst stage (129-256 cells), after which, implantation occurs, 6-8 dpc.
Read More

Signaling through the fibroblast growth factor (FGF)/Erk signal-ing pathway is the earliest known event influencing differentiation of the mouse ICM into its two distinct components, the epiblast and primitive endoderm (hypoblast). This pathway leads to expression of the GATA transcription factors, Gata6 and Gata4, which are eventually restricted to the PE.
Read More 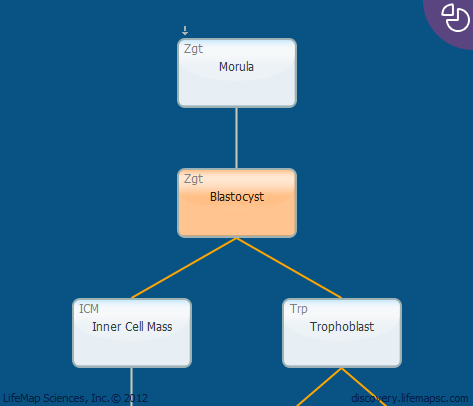