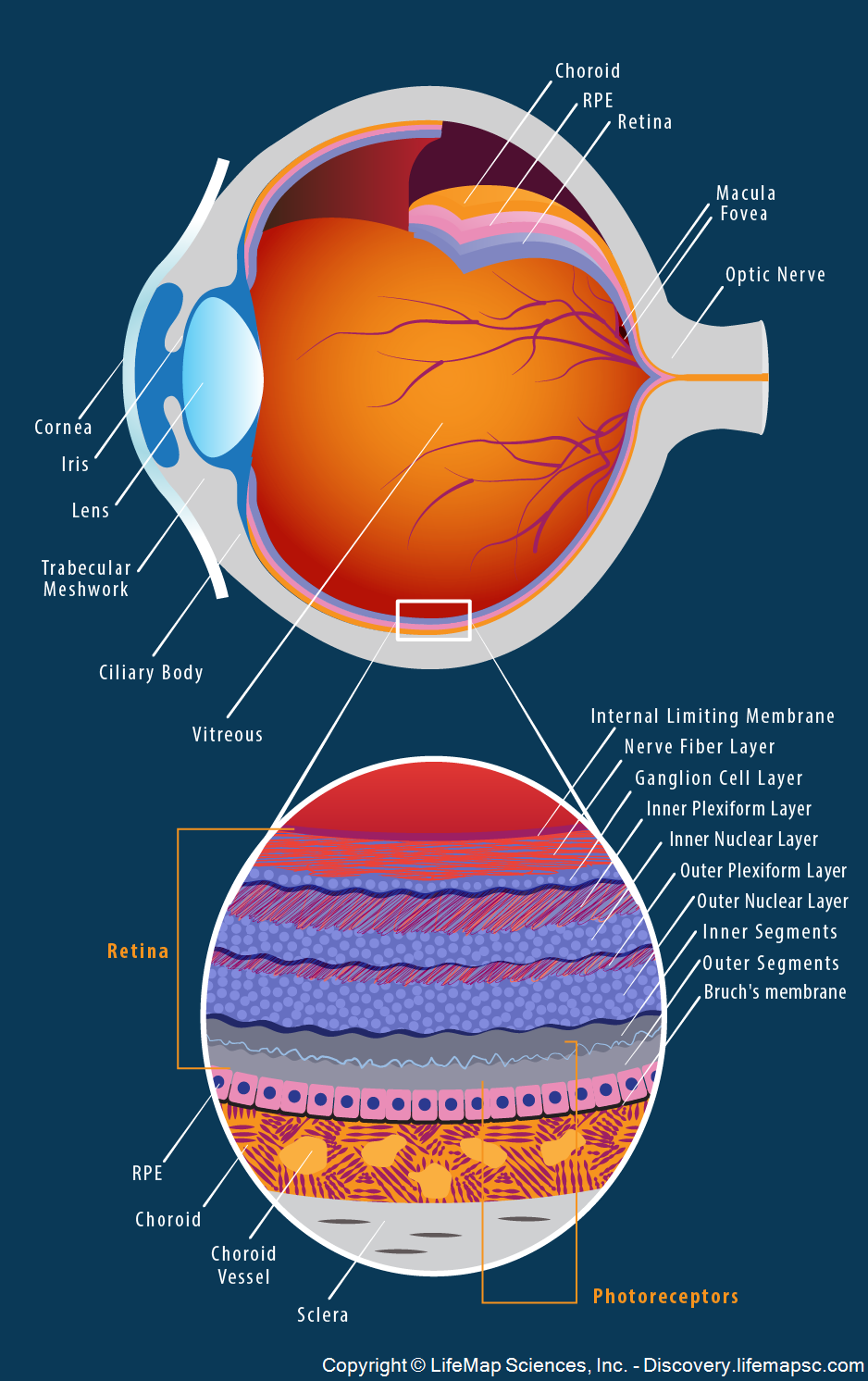 The anatomy and structure of the adult human eye.

Top, The outermost layer of the eye is composed of the cornea and sclera. The middle layer is comprised of the choroid, ciliary body, and iris. The retina makes up the innermost layer (blue), which receives blood supply from the choroid (orange) and retinal vessels, via the intermediate layer of the retinal pigmented epithelium (RPE; pink). The aqueous humor, vitreous body, and flexible lens are contained within these layers. The aqueous humor is a clear fluid that is localized at the anterior chamber, between the cornea and the iris, and at the exposed area of the lens. The vitreous body (or vitreous humor), is a clear jelly, of significantly greater volume than the aqueous humor, that fills the space between the lens and the retina. The lens is suspended from the ciliary body by the suspensory ligament, made up of fine transparent fibers. The macula is an oval-shaped, highly pigmented yellow spot near the center of the retina. The fovea is a small pit at the center of the macula, that contains the largest concentration of cone cells in the eye, and is responsible for central, high-resolution vision.

Bottom, A magnification of the retinal cell population, RPE, Bruch’s membrane and choroid layers. The retina is composed of distinct layers: Inner limiting membrane: a basement membrane enriched with Muller glia cells; Nerve fiber layer: houses axons of the ganglion cells, which give rise to the optic nerve; Ganglion cell layer: contains nuclei of ganglion and displaced amacrine cells; Inner plexiform layer: the site of the synapses between the bipolar cell axons and the dendrites of the ganglion and amacrine cells; Inner nuclear layer: contains the nuclei and cell bodies of the bipolar, horizontal, and amacrine cells, as well as Muller glia; Outer plexiform layer: contains the projections of rods, which end as rod spherules, and cones, which end as cone pedicles, both of which synapse with dendrites of bipolar and horizontal cells; Outer nuclear layer: houses the rod and cone cell bodies; Photoreceptor layer: a layer that contains the inner and outer segments of the rods/cones;