The photoreceptor is a light-sensory neuron that absorbs light stimuli at its outer segment that is associated with the retinal pigmented epithelium (RPE). The light stimulus is translated into an electric signal which is then transformed to the interneurons in the inner nuclear layer (INL). M cone photoreceptors contain the M opsin which is sensitive to medium wavelength light (green light). In mice, expression of M opsin begins at around postnatal day 6.

Photoreceptors constitute over 70% of retinal cells, where rod photoreceptors outnumber cone photoreceptors at a 30:1 ratio in mice and 20:1 in humans. Across the retina, rods and various cone subtypes are arranged in an elegant laminar and non-random pattern (mosaic). In humans, unlike the mouse, a cone-only region, called the fovea, exists in the center of the retina. The cones in the fovea are very thin and compact and are responsible for high visual acuity. Within the fovea, cones expressing either green (M) or red (L) opsin predominate, and the cones expressing blue opsin are sparse around the peripheral fovea region. Outside of the fovea, the density of rods increases with the highest rod density in the parafoveal region.

In humans, expression of M opsin is observed at ~Fwk 15
Read More 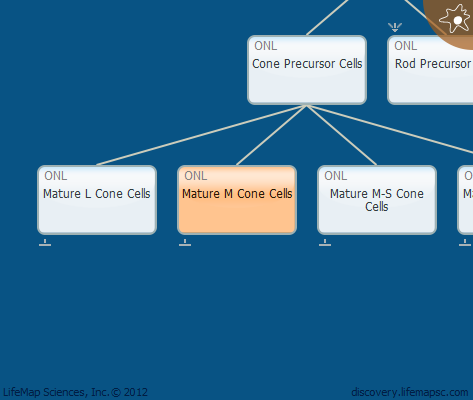