Presegmented somitic mesenchyme cells are mesenchyme cells that lie in the putative segment area, known as the presegmented somatic mesenchyme.  These cells are exposed to intense retinoic acid (RA) signaling. Their RA responsiveness is enabled by a periodic signaling pulse provided by segmentation clock. During maturation of the presomitic mesenchyme, the cells acquire rostro-caudal polarity. Notch signaling determines the posterior somite fate, while Mesp2 gene expression and activity is responsible for establishment of the anterior somite. In addition, the cells undergo mesenchymal to epithelial transition and acquire a columnar shape, accumulate β-catenin, which participates in formation of adhesion complexes, undergo significant changes in cellular organization, such as arrangement of the nuclei in the basal position, exhibit apical relocalization of the centrosomes and formation of the basal lamina. All these changes occur in parallel to formation of the intersomitic boundary. Some studies have demonstrated that the cells within the core of the somite (somitocoele) maintain mesenchymal characteristics and further give rise to the mesenchymal sclerotome, together with the ventral epithelial somite cells. 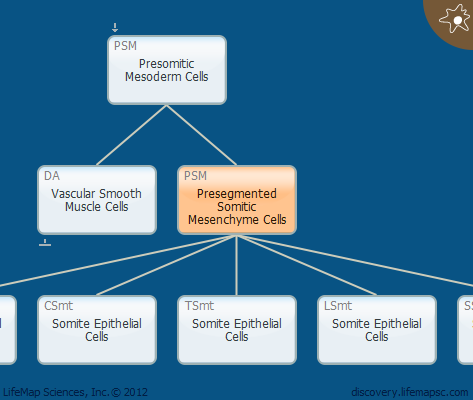